Thoughts that mattered for trade this week - 1

- A delay in filing a response by an Indian exporter (Pokarna Engineered Stone Ltd) to a regulatory enquiry by the US Dept of Commerce led to imposition of a whooping 323% anti-dumping duty. India is the chief supplier to US market for quartz countertops, and this particular exporter is a major player there. The delay in filing was 5 hours, something that could have been condoned in the larger interest of trade. The prices of quartz countertops in US market would now go up, hurting Indian exporters and US consumers while benefiting the complainant importer in the USA who imports from some place other than India.  Here's the link for more info.

- Two things may hurt dollar dominance as per The Economist in this post. One, the digital-currency systems that may evolve out of central banks from China, India or Brazil. UPI is specifially mentioned in the post, probably due to the resilence it has shown in the face of huge number of transactions. Two, the evolving decentralized finance systems such as cryptocurrencies. Ethereum is moving away from the proof of work concept to proof of stake which would then take a fraction of energy currently consumed - 0.05% of current consumption to be precise. This is a significant step in the evolution of crypto.

- Prof. Raghuram Rajan criticizes the Production Linked Incentive scheme. The professor argues that the amount of subsidy doled out under the scheme creates perverse incentives to shift assembly plants into India. He hints that these assembly plants might move out once the subsidy stops. He argues that the scheme is making Indian consumers pay more (due to higher tariffs imposed on assembled phones, for example) while the Indian taxes pay for the subsidies. The solution? Professor recommends human capital investments, better land acquisition process, better infrastructure and better taxation and tariff policies. The recommendations are lazy thinking. Refuting professor's first set of arguments is easy for any serious trade policy practitioner. To give a hint, the professor agrees that he has scanty data to form any opinion about the PLI scheme.

- While Prof Rajan criticizes India for strengthening her industrial policy, the US too is not listening to the professor and doing a full fledged incentive raj for chips, clean-energy and electric-vehicles. The budgetary outlay of USA is far bigger than that of India's.  Joe Biden’s industrial policy is big, bold and fraught with difficulty. As per The Economist, "The sums involved are vast. An infrastructure law passed last November assigns more than $20bn for new clean-energy technologies such as carbon capture and nearly $8bn for electric-vehicle charging stations. A technology bill approved in July will put $52bn into semiconductors while promising a further $170bn to support research in other fields. An act passed in August allocates $370bn to combat climate change, including investments in clean vehicles and renewable energy."

- If you are thinking that appetite for global trade is waning, probably you are not looking at services exports. "This 'new globalization' is based on digital services, research and development, data, ideas, and other intangibles. This development has been going on for a while and has evolved more rapidly after the previous global financial crisis (GFC) in 2008-9", says Erik Van Der Marel in his post. This gives hope for India to ride an export led growth model in services. A visual from the post is placed below: 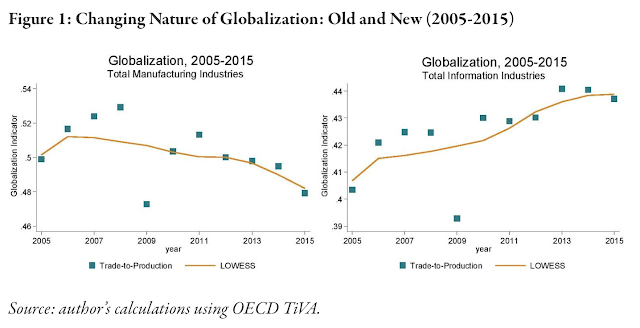 1. Quiet quitting: Elders in corporate firms feel that youngsters don't give their 100% to the job these days. Most just do enough not to get fired, or better still, wait for the managers to fire them while doing almost nothing. Work is low on priority, and family, vacations and leisure are high. Such people, it is alleged, are part of the trend known as 'Quiet quitting'.

2. Moonlighting:  Infosys warns that employees who moonlight would be terminated. Same-to-same says IBM in India. Moonlighting is when while holding a regular job, the (software) engineers also work full or part time with another regular or startup firm. As the days are spent at the regular job, the second job is usually when the natural satellite shines, hence the term.

Million dollar question: If an Infy engineer is scared of the HR and quietly quits her moonlighting job, would the Infy job be then called sun-shining?