Showing posts from May, 2012
Show all

By Tirumala Venkatesh Kaggundi - May 20, 2012
This blog has emphasized many times about the importance of establishing the linkages between exports performance to incentives provided by the Government. The urgency of this hit me when I went to a customs commissionerate on an attachment. The perspective on export incentives, when seen from the revenue angle, is different to, when seen from export promotion angle. The revenue collectors look at such schemes as a loss in revenue. During one such talk and presentation given by a senior customs official, the officer said that removal of DEPB scheme had no impact on exports. Upon prodding, he came up with numbers and showed that the exports had remained same, or increased in some areas, after the DEPB scheme was withdrawn. So, he concluded, DEPB had no impact on exports performance.  DEPB was an export incentive scheme launched with an intention of offsetting the duties incurred on the inputs that go into export products. Drawback is another such scheme, with similar intent of du
1 comment
Read more

By Tirumala Venkatesh Kaggundi - May 14, 2012
There was a problem with the reporting of merchandise exports data a few months ago. It was blamed  on computer crash. Commerce secretary retorted with a 'mistakes do happen' stuff. I personally never bought that line, knowing very well, that no 'crash' can do what had happened. A very well written piece, with scathing attack on the commerce secretary can be seen here . It is a must read for perspective on the issue. The magnitude of error is logically reasoned out below (from the article) and that's the key to lot of answers. It reads: "... Fourth , the real goof-up is not merely $9.4 billion, but much bigger. For example, the figures given out on Friday spoke of a $15 billion over-reporting of engineering exports, and a $12 billion underestimation in the case of petroleum and gems and jewellery. The net figure may be $9.4 billion, but what has really happened is a $27 billion error – since one error in engineering and another in petroleum and gems can
1 comment
Read more 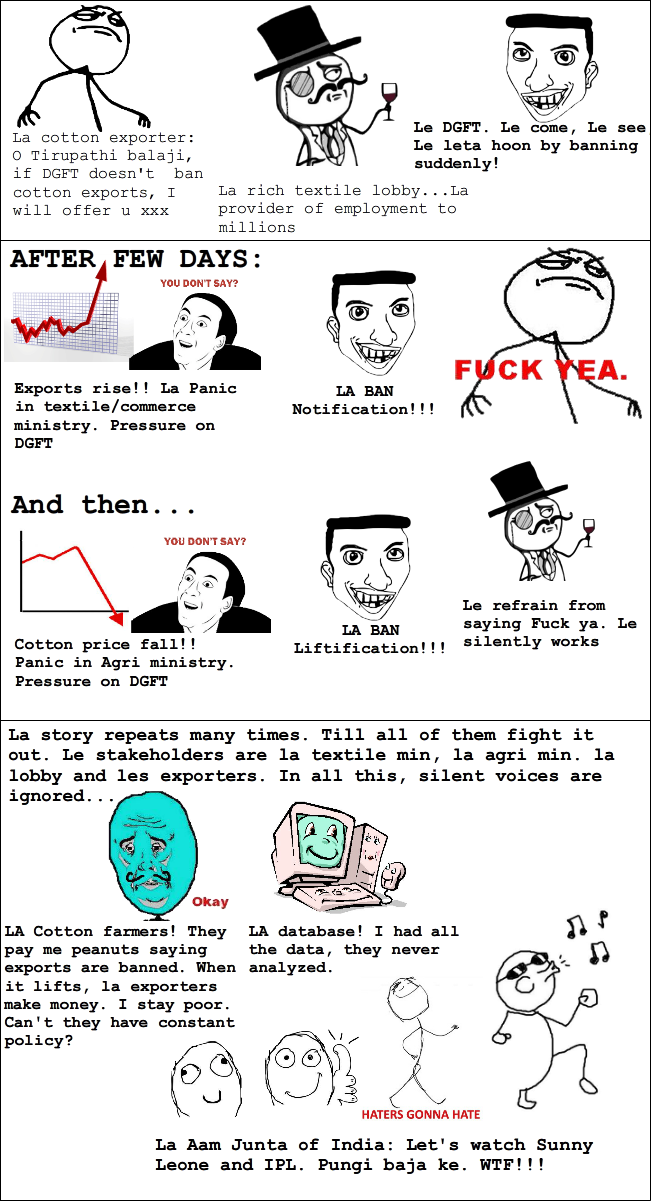 By Tirumala Venkatesh Kaggundi - May 11, 2012
There was a news item on Exports sops   in economic times recently. It's about boosting exports by providing  discounted interest rates and product and market linked incentives. Chapter 3 of Foreign Trade Policy covers product and market linked incentives.  ET goes about criticizing the idea in the following words: "The government’s plan to bring back  subsidies such as cheap loans to prop up exports makes no sense. Instead, the government should open up trade in farm products, which are severely restricted now. A record 75 million tonnes of grain will pile up by next month and much will be lost in the monsoons that will follow. Instead of allowing grain to rot, the government should allow exports. Beefing up storage, marketing and transport infrastructure will also increase the competitiveness of manufactured exports. A weak rupee, which inflates import costs, actually improves export competitiveness. Competitiveness is the answer, not sops." The criticism ca
Post a Comment
Read more