Showing posts from February, 2018
Show all

Punjab national bank fraud involves international trade where goods and capital move in and out of country. While the goods move physically, the capital moves (or at times doesn't) through various electronic arrangement between banks. The aim of this post is to enumerate various frauds that have been noticed in this area, and which are linked in some ways to capital controls that India maintains. They wouldn't have occurred but for the myriad capital controls placed on our economy while keeping an open current account. When goods can move free, and capital cannot, one can become a mule for the other. Other than capital controls, money laundering may also be the motive in few of them. Frauds in international trade Anyway, here are the common modus operandi of some popular frauds 1. Under or Over Invoicing of Exports/Imports - The 90s fraud This was a common method of evading capital controls and to gain wrongful incentives under various government support pro
Post a Comment
Read more

The numbers behind the President's rant 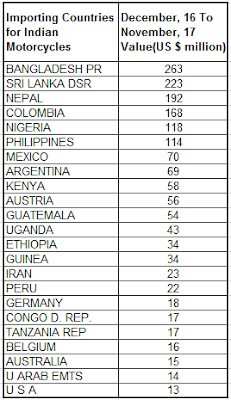 US President Donald Trump criticized India for high import duties on Motorcycles (ITC HS code 8711) referring to the tariff hurdle faced by Harley Davidson while exporting to India. Some quotable stuff from Donald Trump's discussion with US Congress is reproduced below:  “We pay a tremendous tax to get into their countries — motorcycles,  Harley-Davidson  — it goes into a certain country. I won’t mention the fact that it happens to be India, in this case,” the US President said, amidst laughter from the audience. “And a great gentleman called me from  India  and he said, we have just reduced the tariff on motorcycles, reduced it to 50 per cent from 75, and even 100 per cent’,” Trump said in an apparent reference to his last week’s conversation with  Prime Minister  Narendra Modi. “If you are Harley-Davidson, you have 50 to 75 per cent tax, tariff to get your motorcycle, your product in. And yet they sell thousands and thousands of motorcycles, which a lot of peopl
Post a Comment
Read more

Return of Protectionism - Why both Panagariya and Adhia are wrong 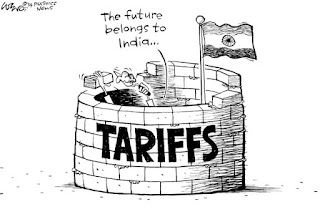 Arvind Panagariya calls the recent duty hikes by the Government as "Return of Protectionism" . This rise of customs duties in the budget has come on the back of similar hike on electronic items such as mobile phones during December 2017. It gives a feeling of protectionism being in the air. However, it might not be so. Panagariya's argument broadly goes this way: Panagariya warns against this approach - Revenue collection is not the only purpose of recent duty hikes. It is done with an intention of supporting domestic industries - Panagariya (mis)quotes Adhia in the article to support his claim. - Giving examples of steel and mobile phones, he explains how customs duty hikes would ultimately harm consumers by way of slowing down digital India or raising cost of inputs for domestic sector - He says that going by the past experience, the supposed benefit to domestic firms who are licensed to manufacture locally doesn't materialize. He gives the exa
Post a Comment
Read more

Why DGFT should not be under Finance Ministry

- February 09, 2018
(While this blog is usually about international trade and economic policies, this particular post would digress to cover more mundane bureaucratic concerns in trade policy making and implementation. This post is a reaction to coverage in media ( here , here , here ) triggered by a letter written by IRS association (and later tweeted) to finance ministry regarding bringing DGFT under Ministry of Finance (MoF). The letter appeared too one sided to me, so I am providing alternate viewpoints for more informed discussion.) The current argument, as outlined in the letter from IRS officers association, that DGFT should be brought under finance ministry ends up taking a parochial view of the role and functions of DGFT. The letter seems to equate DGFT to few export promotion schemes where some 'duplication of work' happens leading to confusion to trade and revenue loss at times. It is important to understand two things here, so that we may broaden the view and analyse the matte
Post a Comment
Read more 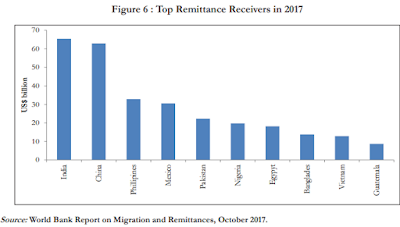 What is dutch disease? In my last blog post I had mentioned about Dutch disease type of effect present in India due to services earnings and foreign inward remittances. I had mentioned,  I have reasons to believe that Indian merchandise exports suffer because of unnecessarily strong rupee. The rupee strength is derived from the fact that we are accumulating reserves due to net inward flow of foreign currency through capital inflows, services earnings, and huge remittances from expats abroad. We maintain a significant current account deficit on merchandise trade (roughly 200 Billion USD), and if other inflows were absent, this deficit would have ideally weakened the rupee. A strong service sector earnings, with high remittances flowing in, when clubbed with other capital flows into India, buoy the rupee up and make the manufacturing sector uncompetitive. It is kind of  dutch disease  syndrome where the remittances and services are harming manufacturing competitiveness. Roughly,
Post a Comment
Read more 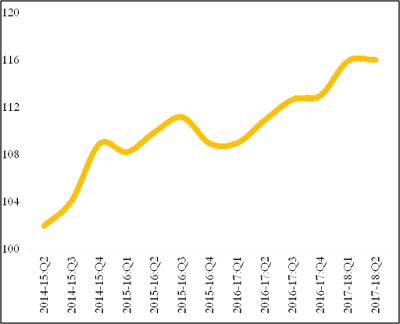 US treasury secretary Steven Mnuchin said recently that he backs a weaker Dollar . He said that a weaker dollar is good as it relates to trade and opportunities.  This comes on the back of US corporate tax reforms (rate reduction and other) with a solid backing of America first thinking. Mnuchin was quick to add that when he says America first, it includes working with the world; it's just that America happens to be the biggest market and trade partner for most of the countries.  The move has been criticised by experts and columnists . The main criticism has been that the US treasury secretary has given wrong signal to the markets at a wrong time. Last time they did that, to threaten Japan against a weak Yen during Clinton administration, they took almost two years to get out of the depreciation hole. A strong currency indicates the strength of the US. As Dollar happens to be the reserve currency of the world, it's important that the credibility through strength is m
Post a Comment
Read more
More posts