Showing posts from January, 2019
Show all

Bans are not always effective as we know. Gujarat's prohibition has given rise to a thriving black market for liquor, whereas the ban on prostitution has held up relatively well in India with only a small steady state black market that has not grown bigger. Selling and consumption of beef on the other hand, where banned, has been effective to a large extent - to the detriment of the health of cattle and leather industry - as was witnessed during recent ban on cow slaughter in Uttar Pradesh. Bans are blunt instruments. It is necessary for a policymaker to study the effects from the prism of effectiveness of achieving policy objectives of a ban, over the negative externalities, and also lack of effectiveness arising due to administration issues. It is not that a stiffer punishment would automatically lead to desired outcome. To cite an extreme example, rape in India attracts imprisonment of 7 to 10 years. Murder attracts life term or hanging. If the punishment of rape is inc
Post a Comment
Read more

GVCs and the tariffs - a simple fact the free traders miss 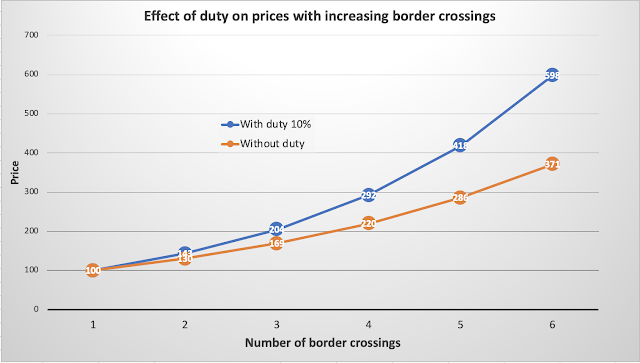 A common argument of free trade supporters runs this way: Tariffs create barriers to movement of goods - India has high tariffs on various goods  Global Value Chains(GVCs) operate better with low barriers for movement of goods Therefore high tariffs are responsible for India's lack of integration into various GVCs In principle the argument is correct.  For a graduate student who has completed a course on International Economics, the above argument is obvious. This belief carries over to the practising economists, and journalists who consult the economists. That's why we read a lot of criticism of the government when tariffs are raised - as they lead to breaking away from GVCs, or rather in India's case, not getting integrated into them. A simple case where a duty of 10% is levied every time a component crosses the border in the journey through the value chain, where a value addition of 30% takes place at each step, leads to a situation where the prices build up
Post a Comment
Read more
More posts