Return of Protectionism - Why both Panagariya and Adhia are wrong

- February 13, 2018
Arvind Panagariya calls the recent duty hikes by the Government as "Return of Protectionism". This rise of customs duties in the budget has come on the back of similar hike on electronic items such as mobile phones during December 2017. It gives a feeling of protectionism being in the air. However, it might not be so.

- Revenue collection is not the only purpose of recent duty hikes. It is done with an intention of supporting domestic industries - Panagariya (mis)quotes Adhia in the article to support his claim.
- Giving examples of steel and mobile phones, he explains how customs duty hikes would ultimately harm consumers by way of slowing down digital India or raising cost of inputs for domestic sector
- He says that going by the past experience, the supposed benefit to domestic firms who are licensed to manufacture locally doesn't materialize. He gives the example of protected small scale industries of India which never picked up competitiveness behind tariff walls.
- He states that regulatory hurdles are more responsible for lack of growth of domestic industries and hence these need to be addressed over imposing import duties.

Therefore, he concludes that we should learn from past and not heed to protectionism.

Panagariya's argument has merits. I had earlier blogged about how the cartelised steel industry's tariff hike tricks have hurt the Engineering and Auto sectors of India. Panagariya has argued on the same lines. However, his argument misses some points.

- Many duty hikes in the budget are to remove the anomaly of inverted duty structure. When Mr Adhia stated that he would 'increasingly put more duties on final products', he was actually referring to this anomaly (Panagariya seems to have missed the point). For example, if a finished item has three components, and if the duties on the components are more than the finally assembled item, the consumers would prefer to import the finally assembled item over importing individual parts and assembling them locally. The local assembly shops would then shut down. Therefore, logic dictates the lower value added items to have lower duties over higher value added or finished goods. Many duty hikes in this budget, for example in the automobiles sector and other finished goods, was with an intention to remove inverted duty structure problem. There is nothing wrong with this. If India wants Foxconn to set up an assembly shop for cellphones here, the import duties on individual electronic parts should be less than the duty on the assembled cellphone. Otherwise it's economical to assemble the cellphones abroad and ship them to India.

- The argument that our industry should be opened up to the world to face the competition and rise up to the occasion is jaded. In a world where everyone follows rules, the natural comparative and competitive advantages would ultimately prevail. However, this is not an ideal world. China is not an ideal competitor. I had blogged earlier as to how Chinese used the currency as policy tool for a considerable  time. China's credit policies and government support programs are  at a different scale altogether. Let's be realistic about our industry's ability to compete with an unfair competitor. Therefore, we need to protect till a certain scale is established. Electronics hardware manufacturing sector is a game of economies of scale, and we are not there yet. Merely blaming a bad ITA-1 agreement wouldn't help. We need to undo the damage. While support programs such as M-SIPS help, some amount of protectionism at this point is not a bad idea. Hence we need to look at the duty structure which this government is doing.

- The move won't hurt digital India as claimed. People who are pained to see a costlier iPhone due to recent duty hikes forget that it is less than 1% of our population that looks forward to buy anything priced at that level. And that elite 1% has demands that are price inelastic. Knowing this, Apple has simply marked up the prices already. The elite group won't bother if the iPhone is priced at Rs 87000 or Rs 90000. Panagariya mixes up the broad Indian consumers with this elite group. The cheaper models of smartphones, the ones that are actually being bought by the broad consumer segment, sell from 3000 to 7000 rupees and the impact of hikes on them would be mostly absorbed by the producers, given the competition here. It won't hurt digital India as Panagariya predicts.

- My understanding is that the tariff lines of items (kites included) that suffered duty hikes recently are mostly the ones that required such hikes for two reasons. First, they were hurting our domestic industries with high employment potential (footwear, toys etc) and second, they are mostly the finished products with inelastic demand behavior or with inverted duty structure.

Finally, Why is Mr. Adhia wrong? Mr. Adhia is defending his move with half a heart. There appears to be some intelligent thinking that has gone behind the duty hikes. It is not merely broad-banded protectionism of the 1960s, but a thought out industrial policy. He should articulate it so. An industrial policy can have a mix of incentives and duty walls to protect and grow a fledgling sector into a behemoth. Against a Washington consensus view, Mr Adhia should throw back employment generation and infant industry arguments. However, one cannot fault him for being misquoted. 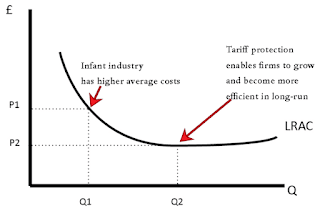 This blog has been a vocal advocate of globalization and free trade policy in the past. However, this support is conditional. I had elaborated earlier as to why it's not a good time for further opening up for India.

When the facts change, I change my mind. What do you do, sir?

Popular posts from this blog

9 Easy steps to get IEC code online from DGFT

IEC code online (While this blog is mostly about foreign trade and international economics, this post is for the benefit of those who are just starting out in the area of international trade from India - one needs an IEC number to get into foreign trade from India, and this is a post to help them) IEC stands for Import Export Code . IEC is mandatory for anyone planning to carry out import export business from India. IEC is issued by Directorate General of Foreign Trade (DGFT , online. Earlier the IECs were issued through manual as well as online mode at the choice of applicant. However, since 1st April 2016, IECs are mandatorily to be applied and issued online. Post GST, since July 1st 2017, IEC numbers issued are same as the PAN numbers. Vide Trade notice number 23 dated 08 August 2018, DGFT has made it very easy to obtain an IEC for anyone having a PAN and bank account. The trade notice can be found by clicking here . With this, it is very easy to get an IEC. Once the
Read more

Government has tweaked the existing scheme of manufacturing under bond at bonded warehouses (Section 58 to 65 of Customs Act) and has come up with a 'Bonded Manufacturing Scheme' which might revolutionise the way manufacturing units are organised among domestic tariff areas, Free Trade and Warehousing Zones, Export oriented units (EOUs) and Special Economic Zones (SEZs). The relevant customs notification (69/2019) on Manufacture and other operations at Warehouse Regulations 2019 is at this link . Invest India (an arm of government that encourages investments in India through realtime assistance to entities to set up business) maintains a dedicated website for information dissemination on this topic at this link  and the FAQs are hosted  here . Relevant Customs Circular (34/2019) that outlines the regulatory procedural details is at this link . Bonded manufacturing scheme overview - [from Invest India's Bonded manufacturing website] The salient part of this scheme
Read more

WTO moratorium on E-Transmissions and OECD Pillars for digital economy

Moratorium on Cross Border E-Transmissions If one imports a book into India, one will pay applicable customs duty (currently 10% basic customs duty, and all applicable cess/welfare charges). However, if one downloads the same book over Amazon Kindle, one gets it duty free. Kindle books are almost always cheaper than their paper counterparts and the zero import duty is one of the factors keeping it that way, other factors being savings on printing/paper, transportation etc. This is an example of how the moratorium on international cross border taxation on Electronic Transmissions (ET), adopted by WTO in 1998  affect the prices.  Share of Digitalised Products in Global Imports - as represented in UNCTAD study Also, there is the question of direct taxation, in terms of corporate taxes or taxes on profits from the earnings made in India for companies who are highly digitalised in terms of delivery/users/markets (Amazon cloud services, Facebook, Google), and where it is n
Read more