Cartels, games and the fertilizer subsidies in India

I had blogged about the Fertilizer procurement and import issues (especially for Potash and Phosphate) here.
This time I would blog about the international cartel and the game that forced some policy relaxation in this area. I shall be talking about Phosphate (P which comes from Di Ammonium Phosphate or DAP) and Potash (K which comes from Murate of Potash, shortly called MOP). These two are major nutrients apart from Nitrogen (Urea, obtained from natural gas/Naptha). India imports 90% of its requirements in the phosphates (P) and 100% of potash (K).

P & K are now decontrolled and are covered under open general license and anyone can import them, unlike urea, which is still under control and can only be procured by canalized agencies with government licences. The amount of subsidy given is calculated by the formula; Subsidy = Actual cost - MRP. Earlier, the MRP for P&K was controlled and fixed by the government and hence the subsidy was a function of actual cost. The actual cost in turn was determined by international prices. Subsidy bills varied every year based on what the international prices were. And that's where the trouble began. In the year 2007-2008.

Now, Cartels are not a very viable option theoretically. The reward to renege from the cartel is extremely lucrative for an individual member, and generally that leads to break-up of cartels. Once a strong member gets out, the cartel becomes meaningless. You can find more about unsustainability of cartels here.

Internationally Canpotex is the main 'alleged' cartel in the field of Potash (MOP). They cover the major producers of potash from Canada and hold a substantial share from organizations from Russia and Belarus and more or less cover all the producers in the world. So, this was a close cartel which was difficult to break. In the field of phosphate too, due to similar nature of ore availability, there was an international cartel operating. China is a fellow consumer like India, however, they are slightly luckier due to some indigenous availability. Brazil is one more nation like us. Now, India is number 1 importer of Potash at 6 million tonnes. The case is similar in the phosphate, we being a big enough buyer to affect international price movements at around 25% of total world imports.

The movement of international prices of MOP and DAP in dollars per tonne is given below. 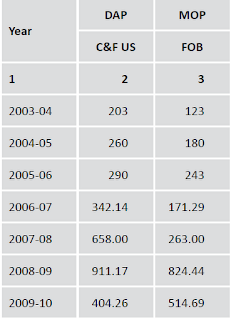 The subsidy/concession that went for some of these years in Rs. Crore is given below ( I couldn't find the figures in dollars, sorry) 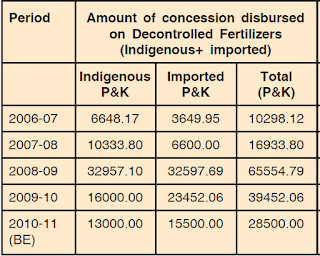 A look at the subsidy bill will show the sharp spike due to the above price shoot up in the imported P&K.

The government's total subsidy bill (including Urea), shot up from around 26000 crores in 2006-07 to around 100000 crores in 2008-09. This four fold increase was simply because the cartels decided to play hardball. They knew that irrespective of the price, the demand for P&K in India will remain constant (or increase incrementally) as the MRP in India is constant due to subsidies. They rolled the dice.

China resorted to indigenous sources. India tried and failed to break the cartels. Also, India struggled to meet the mounting subsidy bills.  That's when people in the Department of Chemicals and Fertilizers came up with solutions, which at other times, would not have been probably accepted.

India tweaked the subsidy formula. Now, the MRP was no longer fixed for P&K. The fertilizer companies were allowed to fix/determine it. So that was a major decontrol step. Now the subsidy/tonne for P&K was fixed. So the formula remained same, i.e. Subsidy = Actual cost - MRP. However, now the actual cost fluctuations were passed on to the MRP, the difference being a constant, which the Govt determined from year to year.

In effect, what happened was that the demand curve was operational now. The price increase was passed on the consumers, with a subsidy effect. However, as the downward sloping demand curve dictates, the quantity demanded came down with price rise, drastically in this case. When the demand came down, it affected the international cartels who were forced to cut the prices as can be seen from 2009-10 onward. The market forces were now operational. And the subsidy bill came down significantly for Govt of India.

The catch was, what was the effect of this decreased consumption on crop output? Did the production of crops go down? If yes, then this is not acceptable solution due to food security issues.

I got the answer to this from a senior official recently while walking through the narrow corridors of Shastri Bhawan. Apparently, P&K remains in the soil for around 2 to 3 years. So once applied, you can survive on the residual in the soil for coming couple of years. That gave the courage to the government to take the risk and teach the cartels a lesson. I found the entire episode brilliant. Hence the blog.

By Tirumala Venkatesh Kaggundi at April 18, 2012

Comments are moderated to prevent spam. Your comment will be online shortly. Kindly excuse the lag