Raw sugar is brownish in colour due to presence of molasses, considered an impurity in this case, and tastes almost like white sugar, except for a weird, but not unpleasant, aftertaste. It's crunchier too, which makes it a great topping on some bakery products. Also, its considered healthier than the white sugar as the refining process uses more than 50 different chemicals to make the sugar white. That's a myth. Raw brown sugar is as unhealthy (or as healthy) as white sugar as there's enough chemical processing on cane juice to obtain the raw brownish sugar. Anyway, the option of using brown sugar is not easily available in India as we usually get only white sugar in the market. The baking variety brown sugar is quite costly. I have seen it at reasonable prices in US supermarkets though, probably indicating the health revolution that lead to the switch of customers' tastes from white to brown. Raw sugar is produced in most of the sugar mills across India and they are supplied to sugar refineries to convert into white sugar. Many sugar mills also have sugar refineries and some of them are integrated plants where activities from cane crushing to final white sugar is done in one single plant. The mills are mostly concentrated in North Karnataka, Maharashtra and some parts of UP. Some refining mills, such as Renuka Sugars - the leading sugar manufacturers in India, also import raw sugar from countries like Brazil and refine them here for exports.

Sugar was tightly controlled commodity in India due to its linkage with farmers at the backend and the consumers at the front end, both sensitive to the price of sugar, but in opposite directions. There is a directorate for sugar under Ministry of consumer affairs, food and public distribution, which is responsible for controlling sugar related matters. Every step of sugar value chain was tightly controlled till last year, right from production to consumption and international trade. The mills are given licenses to operate, and are given captive areas for cane procurement from farmers. The farmers must give the sugar only to the marked mill of their area and not to any other mill. The govt. fixes the price to be given to the farmers. The mill licenses are not easy to come by due to byzantine laws, and most of the mills are owned by local politicians or highly influential people of the area. The sugar mills had to mandatorily surrender 10% of the sugar produced to the government at almost half the market rates, as fixed by govt. for public distribution purposes. The rest 90% of sugar couldn't be sold in open market. The govt. used to, till last year April, issue 'release orders' on a monthly or quarterly basis to each mill for supply of sugar to market. This was to keep prices under check in domestic market. Also, depending on available quantity of sugar in the mills, the domestic demand projections, and world market prices, the govt. regulates the exports/imports. Trading is tightly monitored and controlled though licenses. Such off/on policies on international trade of sugar from India adds to uncertainty in this sector. The control even extends to the byproducts of the mill such as bagasse, molasses etc. The world price of raw sugar is around 35 to 40 US cents per kg in the last few months.

The sugar industry was partly decontrolled last year and 10% levy was removed. Also, the release order mechanism was eased. Now the Govt lifts the sugar from the market and bears the subsidy burden on public distribution system of sugar directly.  The Rangarajan committee's report in this regard was the guiding light for these partial reforms.

This incentive has been opposed at WTO by Australia, Columbia, Brazil, EU and others. The WTO link for this issue can be found here. The objections are primarily due to subsidising nature of this export incentive. India had agreed not to subsidise exports as per WTO rules.  In reply to the objection, India has stated that this policy intends to diversify India's sugar exports from white to raw and as of now, no payments has yet been made. The dispute is on, and so is the incentive scheme.

One has to see the incentive from the point of view of domestic compulsions too. There are national level elections due in April/May. The payment to the farmers, a significant vote bank, has a lag which varies from mill to mill. After supply of cane, the farmer has to sometimes wait for months in order to get the payments. The mill owners depend on govt for release orders for sale. The release order depends on supply and demand in the market and this builds up a cycle of lags. One way of accelerating the money to mills and farmers is to allow exports. Not many mills refine the sugar. So, allowing raw sugar exports is a good idea. This would let the money into mill owners hands and in turn into farmers hands, and who would in turn, apparently, vote favourably in coming elections. Such is the logic that must have flown in the govt circles while making this policy, as the document makes it amply clear with these statements:

This is understandable. The measure is temporary, as seen from the document, and is not perpetually export subsidizing. Given this, and the fact that such stop-gap incentives will lose favour once elections are over, it would not be very difficult to deal at WTO. By the time the battle lines are drawn at WTO, the incentive in question might have ceased to exist.

However, the pain points remain, such as the payment to farmers not reaching on time due to myriad controls and regulations, the still existing restrictions on sugar industry and the uncertainty arising due to socialist style departments going about implementing control ideas on this commodity. Hope the elections bring more than just a windfall of one time payments. 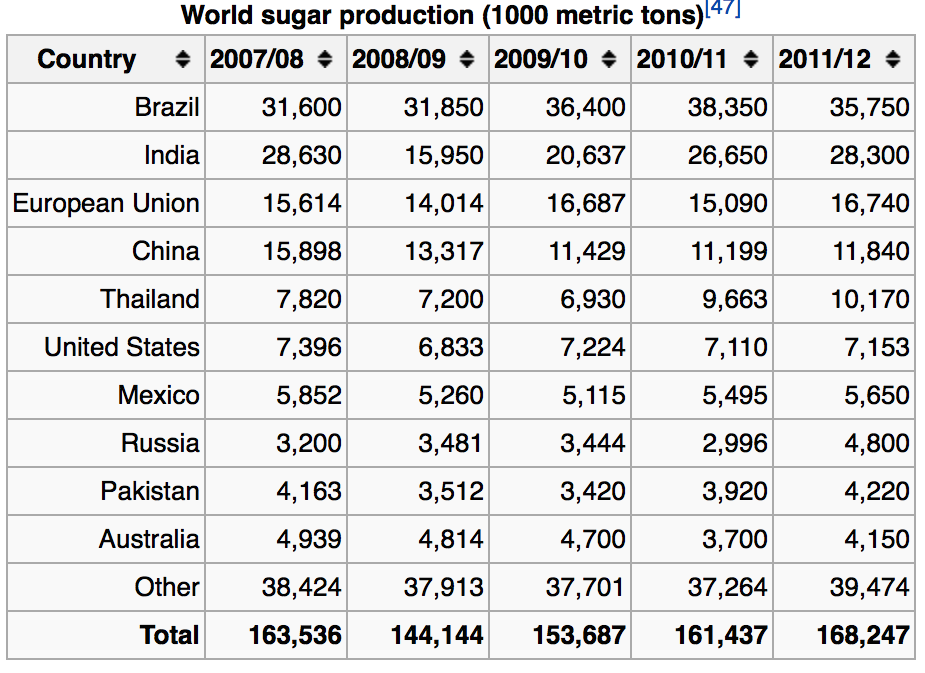 PPS: Special thanks to Shri K M Harilal, Dy Director General of Foreign Trade, for pointing out decontrol of sugar industry which I had missed in the post.

By Tirumala Venkatesh Kaggundi at March 29, 2014 No comments: