There was an interesting working paper published by NIPFP recently on the topic "Does weak Rupee matter for India's manufacturing exports?" You can find the abstract here, and the pdf of the full paper here.

I will concentrate on the macro analysis of the paper, about which I have some reservations. The paper analyzes the exchange rate movement from the period 2003 to 2012, against the export growth rate during the same period, and draws the following conclusion:


In the light of above, the paper recommends that policy makers should not aim at weak exchange rate to boost exports. In author's words "direct impact of exchange rate movement on export performance is  weak, therefore, using exchange rate intervention root(sic) for achieving export growth is not a suitable policy option for the Indian economy. Rather it might end up in showing unintended outcomes." I will talk about policy options later, but let me first disagree with the macro result.

Exchange rates do not seem to effect merchandise trade in the way the paper proposes. The paper seems to have ignored the lag effect. Let me illustrate it through some self-explanatory plots. Firstly, here's the plot from the paper, based on RBI data. It has a correlation coefficient of -0.56 as claimed by the authors. 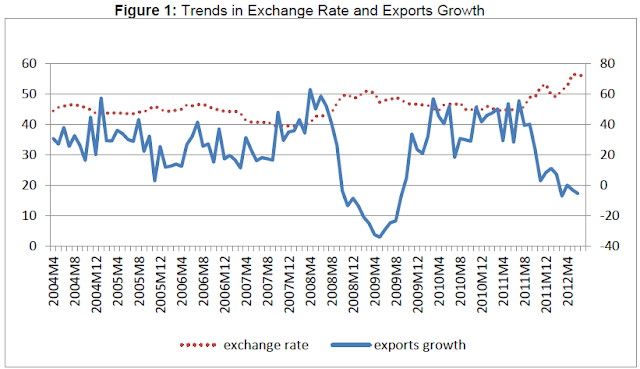 I have downloaded RBI data and worked on it to produce the same graph (with some updates etc) which is produced below:

The above plot has a correlation coefficient of -0.58 which agrees with that of the paper.

Now we shall introduce the lag effect of exchange rates. I will shift the exchange rate by 6 months, 8, 10, 12 and 15 months. Basically, what I have done is, keeping exports growth numbers at same place, I have taken the monthly exchange rate that belonged to a period 6, 8, 10 (and so on) months before the period and superimposed it. The correlation coefficient (marked on the plots near top left)  changes from -0.58 (negative) to + 0.58 (positive). You can see the lag effect in play in the following graphs.


Now, the reason for the lag is something that's interesting. I guess that it is a combination of the way the trade data is reported in India and also to the way the manufacturing industries adjust to the dynamics of exchange rate movement . I have blogged about the data reporting stuff here. The data reported by RBI and that reported by DGCI&S differ due to various reasons as explained in my blog. One of them is the lag in forex realization (upto a year as per FEMA), for the export proceeds.

Also, the manufacturing industry reacts with a lag to the exchange rate movement. If exchange rate changes today, it doesn't mean that all the invoices, work in progress and orders in process will react immediately. The price re-negotiation, hedging effects and adjustments to changing demand at new price, take time, and the true effect shows after some time.

Finally, I agree with the paper on the point that sectoral policies with wholesome approach to trade development is more important than thinking about exchange rates. But then, there's nothing new in that. India doesn't have much of a say in managing exchange rate any longer. The intervention is only to adjust for volatility, and that control too, I suspect, is not very effective.

PS: All data for the post taken from the RBI website, specifically from this link. If you want my excel sheet to check/further work on, drop me an email at tirumalakv@gmail.com

By Tirumala Venkatesh Kaggundi at February 06, 2013 No comments: