TiVA - Database on "Trade in Value Added" by OECD-WTO


International Production Networks (IPNs), or the Global Value Chains (GVCs), are increasingly playing a major role in international trade. GVCs includes those services too, which move with the production value chains, in terms of support activities, such as logistics and business processes, that are linked to manufacturing activities. This blog has been vocal about the importance of IPNs and value chains in global trade. The current post is a continuation of that line of thought.

The way we look at the trade statistics is undergoing a radical change in recent days due to GVCs. Traditional way of looking at gross values of cross-border trade is fast getting obsolete. To use gross trade statistics to develop trade policies, is considered misguided (if not downright stupid!). This fact was recently acknowledged eloquently by WTO DG, Pascal Lamy, in a part of this speech, on 16th Jan 2013:

Traditional statistics failed to give a clear picture of today’s way of trading in manufactured products. They also failed in fully capturing the huge role played by services in manufacturing. But most importantly, they were not good enough in ensuring that trade policy is properly informed by what matters to people: jobs. It is a fact that over the last two decades, global value chains have changed the old ways of organizing international specialization and understanding comparative advantages.

In this regard, WTO and OECD came together to explore new ways of gathering trade data in terms of value add. This resulted in development of the database called TiVA: Trade in Value Add. This initiative would help in understanding trade, and help in trade policy making, by changing the way we look at trade statistics. From the same speech by WTO DG, the key points through which TiVA would benefit are:

In addition, it would also reveal the true nature of economic inter-dependencies and would help in understanding as to how shocks might impact downstream and upstream production.

A simple example of how Gross values of trade is misguiding can be seen below (example taken from here)
"The Trade in Value-Added Initiative addresses the double counting implicit in current gross flows of trade,  and instead measures flows related to the  value that is added (labour compensation, taxes and profits) by a country in the production of any good or service that is exported.The simple example above illustrates this. Country A exports $100 of goods, produced entirely within A, to country B that further processes them before exporting them to C where they are consumed. B adds value of $10 to the goods and so exports $110 to C.  Conventional measures of trade show total global exports and imports of $210 but only $110 of value-added has been generated in their production. Conventional measures also show that C has a trade deficit of $110 with B, and no trade at all with A, despite the fact that A is the chief beneficiary of C’s consumption. If instead we track flows in value-added, C’s trade deficit with B reduces to $10 and it now runs a deficit of $100 with A."

The database, with preliminary results in the form of global input-output table, is now live. You can access it here. India is covered at aggregate level (not at sector level), and services value-add part is missing for India. It covers 95% of world trade and the data is impressively detailed for developed countries. Also, the database is interactive.


For me, the eye opener was that the value of services in the production of goods was much higher than what traditional statistics told, contributing over 50% of total exports, when we account for it in the production of goods, for countries such as UK, Germany and US. For China, it's around one third. I guess the value is around the same, or little higher, for India. (This data is not available for India)


Also, the preliminary data table indicates that trade balances change significantly when we look at the data from value add point of view. For example, China's trade surplus to US comes down by around 25%. This means that a significant part of China's exports reflect foreign content originating in US. It was known, but analyzing the exact magnitude through statistics, is interesting. In fact, TiVA estimates, presented this way, will be better at resolving inconsistencies in international trade data arising from the way re-exports are treated differently by different reporting nations.


Coming back, we need to re-look at our method of collection of trade statistics. It's time DGCI&S looks at the way things are done here. It's a sorry state of affairs, when it comes to trade statistics if we include services. I have blogged about the data issues here, here, and here. A revolution is going on at the international level in this field. I hope we catch up and work on it. Otherwise, we will exist as a missing data-point, in the matrix of excellent data on trading nations. It is also important, to have data in a usable format, for intelligent decision making at policy level. That's the point.

By Tirumala Venkatesh Kaggundi at January 18, 2013 No comments:

Foreign trade data, in merchandise trade, for the month of December 2012 was released yesterday by Press Information Bureau.
The gloom continues, with trade deficit widening to 147 USD Billion for the April-Dec 12 period, higher by more than 10 USD Billion, when compared to the same period last year. The summary is pasted below:

The oil imports constitutes roughly one third of total imports. It increased by 12.18 percent over the period of April-Dec, compared to last year. In December, it increased by around 24% over last year. That's disturbing.
The gold import details are not yet available. I am expecting some action here, given the announcements on possibility of higher taxation on gold imports in future.
The above values are in dollars. In terms of rupees, the exports grew (rupee depreciated) by around 9.35% in April-Dec period, and the imports grew faster at a rate of around 14.76%. So, in both dollar and rupees terms, the trade balance deteriorated.

This economic times article, caught my attention, because they published Govt's thoughts on the issue after the press release. Two statements are noteworthy. The first one is,

Commerce Secretary S R Rao said that the fall in exports have been slightly arrested and "with a new set of incentives, which we get into force from January 1, we expect that in the current quarter (January-March 2013), there will be a further improvement in the export performance".
He said the world trade has not performed well in 2012 and the year was the "worst" in terms of global trade.
"If we look at the WTO forecast for 2012, initially they forecast that the world trade will grow by 3.9 per cent but that has been scaled down thrice and it ended with 2.5 per cent. The 2012 rate of growth in the world trade has been less than half of past 20 year average," he said.

Reacting to fall in exports, Apparel Export Promotion Council ( AEPC) Chairman A Sakthivel said the government should take some steps in the Budget to boost shipments.

Agreed Sir. To the second one. But pray, how do you do that?
The first one is point to ponder. The world trade grew by 2.5%, but our exports actually declined, and our trade deficit increased. This doesn't sound good to me. This area needs to be explored more.
The blogger has already posted about the new set of incentives being talked about here. Honestly, unless global situation improves, I don't see how we will manage to boost exports with these incentives in the short run (with horizons of less than a quarter). In the long run, of course, market and product diversification linked incentives will produce results.

By Tirumala Venkatesh Kaggundi at January 12, 2013 No comments:

Electronics manufacturing industry will get a shot in the arm with applications being invited to apply under M-SIPS, the Modified Special Incentive Package Scheme, which aims to bridge the gap in demand and supply of domestically produced electronics hardware in India.

The issue of our struggling electronic manufacturing industry, and the failure of earlier Special Incentive Package Scheme of 2007, and related issues were highlighted by the blogger here, here and here. This Modified SIPS was notified some time back, but the applications are being accepted from today. The idea is, of course, to help India become a hub for electronic hardware manufacturing, including fabs (semiconductor wafer fabrication units).

The urgency for this measure can be sensed from the plot shown above (from task force report), which projects the Indian imports of electronics to grow to around 300 Billion dollars by 2020, and this will have a devastating effect on the Balance of Payment, surpassing probably the oil imports.

Highlights of the MSIPS scheme (From Press Information Bureau report)

"The M-SIPS scheme provides following incentives:
The Capex includes not only expenditure incurred on plant, machinery and equipment, tools etc but also expenditure incurred on captive power plant, utilities machines and captive R&D including cost of IPRs, copyrights etc. It also includes cost of land and building not exceeding 2% of the total project capital expenditure. These incentives are available for investments made in a project within a period of 10 years from the date of approval."

So, that's in a nutshell. You can read more directly from deity website (deity: Dept of Electronics and IT), regarding the scheme details, forms, procedures etc, under the MSIPS heading.

This is a step in the right direction, though a little late. These incentives are one of the enablers that would help. There are other factors such as power, infrastructure, labour laws, skill development through vocational training etc, that need special attention, if we are serious. However, a step in right direction needs to be lauded. Hence this blog.
By Tirumala Venkatesh Kaggundi at January 11, 2013 No comments:

Worried over the decreasing exports from India, Commerce ministry came up with additional export promotion measures. The measures were announced on 26 Dec by Hon'ble Commerce minister of India. Details here.

Let's imagine two exporting firms. Both are passing through this recession in global demand. One is lucky to have an inelastic demand for its product (say refined petroleum products, e.g. Reliance), and the other one who is affected by global slump (e.g. Brakes India, an auto component manufacturer). Who should be supported through incentives? The one who's struggling in the tough phase, or the one who is sailing well? Someone in the Govt thought that the one doing well should be rewarded; and the one who is struggling needs to be ignored. The logic beats me. Probably, it beats the current Director General of Foreign Trade too, looking at his expression below, while the commerce minister made that announcement :) 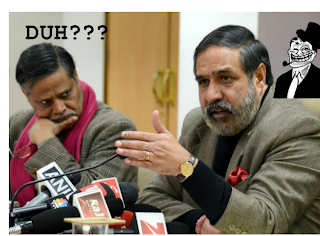